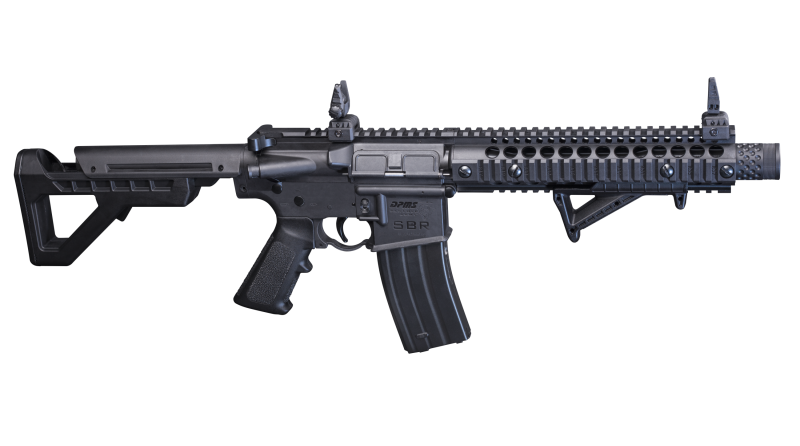 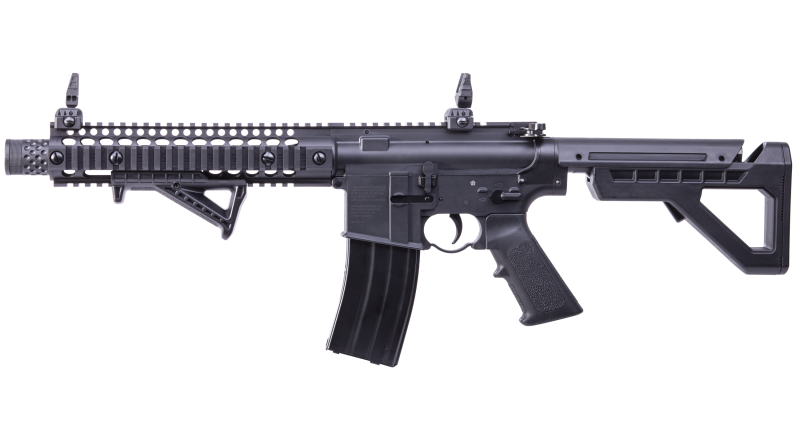 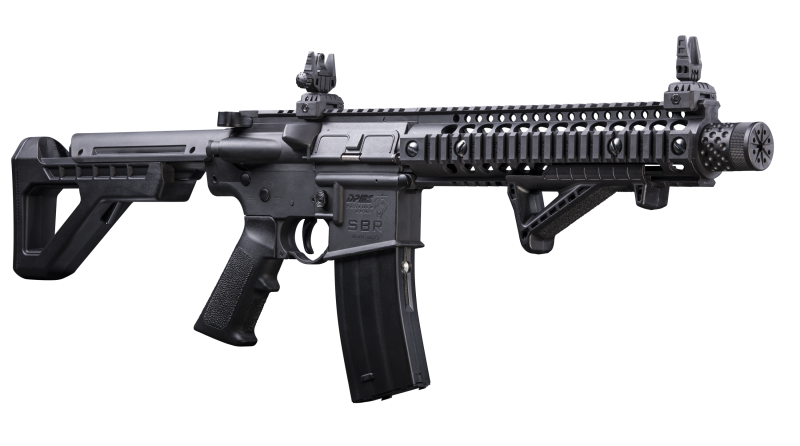 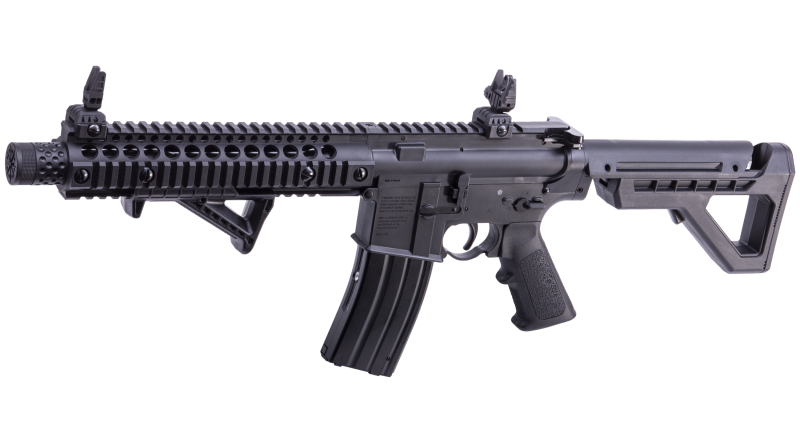 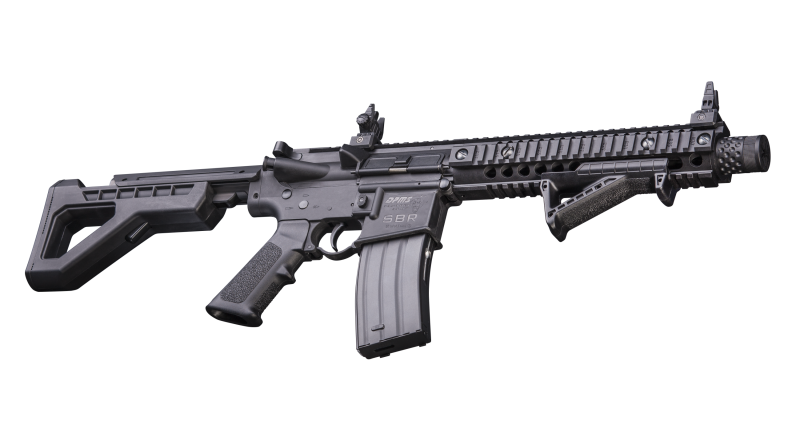 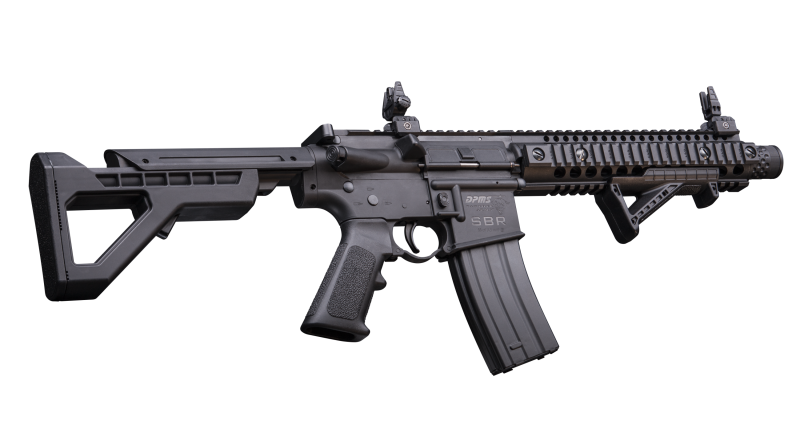 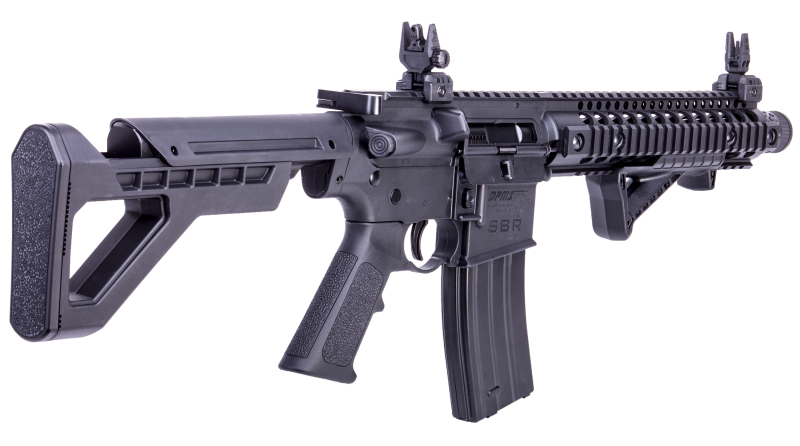 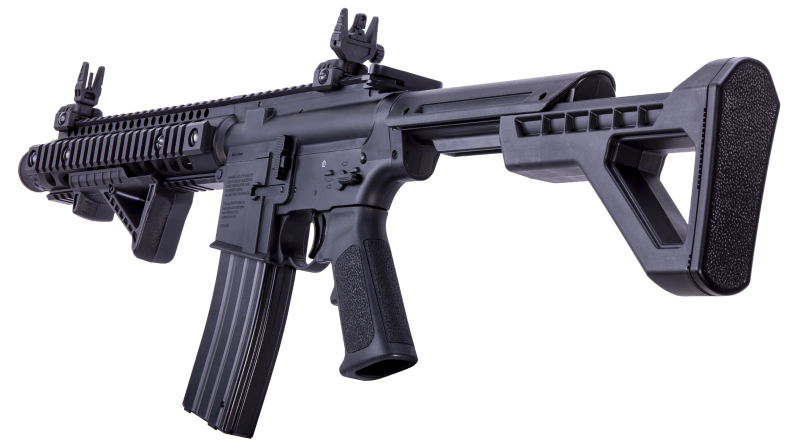 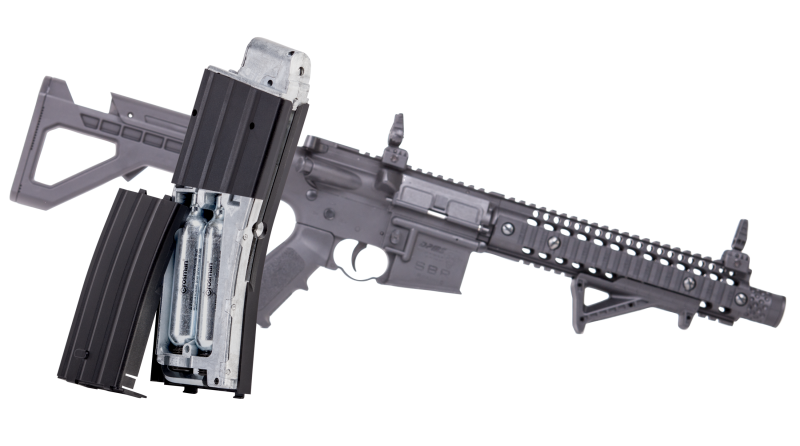 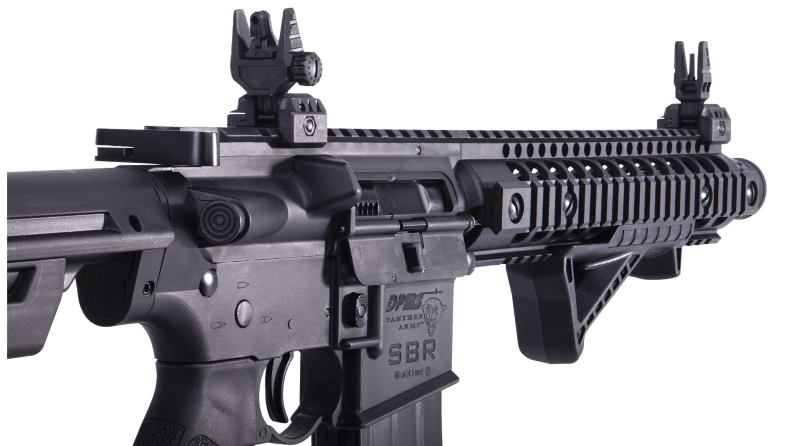 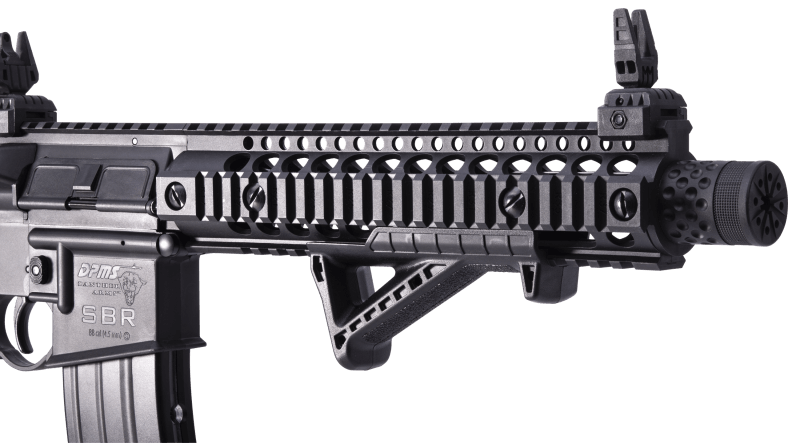 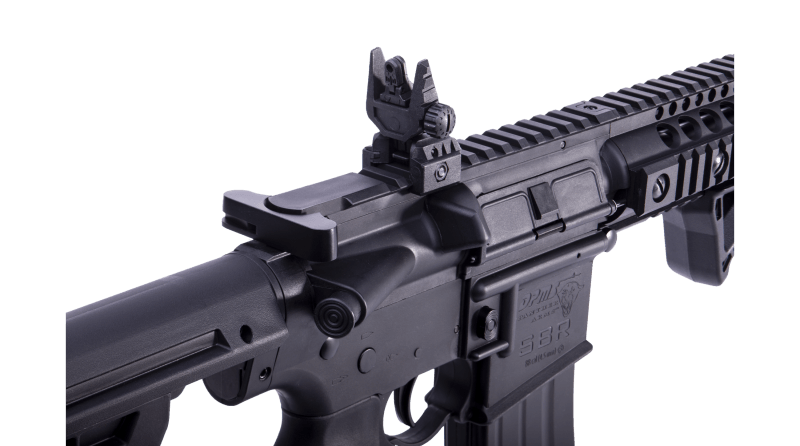 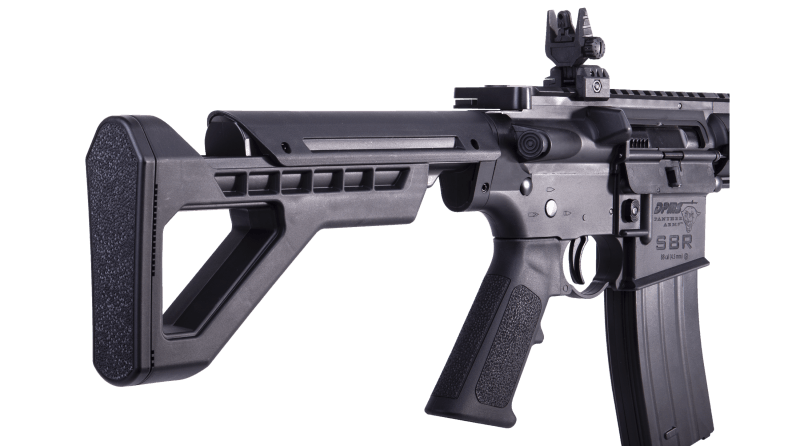 See what all the excitement is all about with the officially licensed and stamped, DPMS™ SBR. This air rifle slings BBs at a blistering 430 fps with a rate of fire at an astounding 1400 rounds per minute! Fueled by two 12-gram CO₂ cartridges housed in the 25-round magazine, the dual-action selector lets you choose between semi and full-auto capability. The air rifle features a genuine real-feel and comes with a 6-point adjustable rear stock, moveable angled foregrip, and Quad rail for the limitless mounting of flashlights, lasers, and other accessories. Comes with a thumb-selector style safety to ensure proper and safe handling, removable pop-up sights, and an adjustable rear sight.

This is a blast to shoot. I bought the kit with the red dot sight and speed loader. It uses 2 CO2 powerlets at a time so a little more expensive to shoot but hey, it's way cheaper than real ammo is right now. My only gripe is the trigger is very heavy and awful. You must really concentrate to to take an accurate shot.

Being both ex-military and a firearm and Air gun owner since the age of 9, I'm quite content with knowing my way around firearms and or airguns to say the least. For the past year I've been at ends with the whole CO2 and fully automatic air gun purchasing. I've been researching every single CO2 equipped fully automatic bb gun around and decided to go with the Crosman DPMS SBR regardless of the pros and cons reviews which were mainly complaints about gas leakage and spring assembly on the rifles magazine. Using crosman's powerlift 12g co2's and Hornady black diamond steel BBs I began testing. First field stripping the rifle cleaning and re-oiling everything myself before reassembling and tightening everything correctly I began my tests indoors at 30 yd with temperatures of 73-80° and in single fire mode using only the iron sights provided in the kit. I have to admit I wasn't expecting the outcome which left me laughing out loud and giggling like I was 9 all over again. I emptied 4 magazines filled with only 20 BBs of the ammunition of listed above before experiencing any real power loss, and even then I was still able to fire off a few more clips before I rendered the co2's useless and removed them. After the first 10 shots I had the sides completely dialed in and dead pan ready for a grouping test... And I'm going to tell you folks that the juice is worth the squeeze on this one! Each of the four clips in five shots sequences held a group no bigger than two inches in diameter and 10 round single shot sequences I held in three inch groupings and I'm including the stray every now and then has not leaving outside those groupings. I've done this same testing 5 days in a row with the same results being the outcome,more or less. Imperfect BBs and or faulty Co2 cartridges would be the cause of malfunctioning or inaccurate shot's in my book with my weapon. I give five stars and highly recommend this rifle to anyone from beginner to advanced skill shooting status. Keep in mind this isn't a pro level air rifle in the four digit range pocketbook but a highly advanced, fully functional and life-like SBR. I won't either waste your time or spoil the excitement by explaining the fun you get out of full auto mode. If you got the time drop the dime you won't be disappointed and like I thought all the bad reviews and complaints I read or from those non-experienced or elderly gentlemen with soft hands who can't accept that their fingertips are too tender for daily firearm activity. However I'm happy enough to mod this thing and feel ok with the money it'll cost, scoped, 45° iron sight relocation, bipod w\attachable foregrip mount, tactical light and laser...maybe one of those all metal disassemble & reassemble suppressors by an aftermarket cnc machinist? Which brings to mind,hey crosman! Where the heck are the accessories for this thing? My only dissatisfaction Sincerely, Lt. David C. Smit A.S.F. Army S.F.

Mag lacks volume, can see where a 50 shot, could be easily possible, sights come on fellows, are not irons, are not adjustable, pop up yes, but very cheaply made plastic, ditch them get a quality sight package, added a good pair for a bought $25.00, also added a $50.00 red, blue, green, dot sight for it, at walmart, works great, with these 2 exceptions air gun works great. But really at $179.00 they could have put in a bit more effort into the sights, not my first air rifle, but my first in year I'm 70 and having fun with it

In my opinion, the BB/Airgun industry has definitely came a long way since I was a kid. I can base that on the fact that I am sitting here, holding a full auto C02 rifle with features and aesthetics that rivals my old side-kick carried as a tactical operator a few moons back. Other than the fact that it is a BB gun, it satisfies my primal urges and second nature to carry such a beast. Most importantly, I wouldn't be ashamed to tell my former teammates that I bought a BB gun! The look, feel, and operation of this rifle is definitely a righteous step forward and if it broke today, I wouldn't hesitate to purchase another. Just give it credit, it's a C02 rifle folks. It's not a 9mm or .223 SMG, but it is much more than just another "BB gun". Good job guys. I have carried Crossman guns since I was 10 years old, and 41 years later, I apparently still am! God bless!

★★★★★
So Authentic a Replica, it "stars" in the last episode of Netflix "Hanna" series!

We have two DPMS SBR's (one each for my Grandkids) to practice "Run n Gun" match shooting. Love the ruggedness and how authentic it looks and operates to real AR-15 SBR's. So I wasn't too surprised to see several used the Netflix Series "Hanna" by Security Soldiers. If you have Netflix or Amazon Prime, watch the last episode 6 of Season 3 near the last 10 minutes and watch the black suited security soldiers with MP5 Airsoft rifles and some with the Crosman DPMS SBR's.

I love this BB gun. FULL automatic, like 21 bb's in 1.1 seconds. So fun to use with my 9 year old. We have a blast each and every time we do shooting practice in the backyard. The coolest part might be the fast loader device that comes with the air gun. I also like the CO2 option, no pumping here, just insert the cartridge and let it rip for hundreds of bb's at a time.

This is an amazing gun for shooting cans and targets in the backyard. Would Like to see a bit more range/fps but for $75 after a discount code, you can't beat it!

I bought this to add to my son's airgun arsenal. I hesitated buying this due to the price and concerns that it would be another piece of junk like the Umarex Steel Strike that I wasted over $100 on. Well let me tell you folks I couldn't have been more wrong. This gun is nothing short of AWESOME!! There is no better feeling than when my 12 year old son said "Dad this is the coolest and best gun Ever!" I could not agree more. Like the guy said in the other review, The juice is definitely worth the squeeze on this high quality air rifle. When you first pick it up and feel the weight of the metal they put in this baby you know why DPMS Panther Arms put their name on it. My only complaint is the same as other reviews which is the 25 round capacity. This gun is so fun to shoot that 25 rounds is not nearly enough. I plan to buy a couple additional magazines to keep the fun going. I recommend this air gun to anyone thinking about purchasing it. It is definitely worth the extra money. You get what you pay for!!

Excellent quality and functions pretty well. Accuracy is not great but that’s not really the point of this BB gun anyway. Great fun just rattling off a mag on full auto!!!

The ammunition and accessories below are recommended for the DPMS® SBR CO₂ BB Air Rifle with Dual Action Capability. 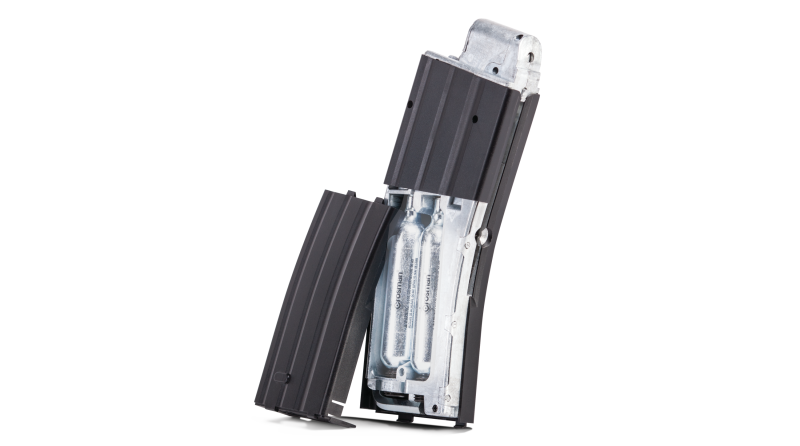 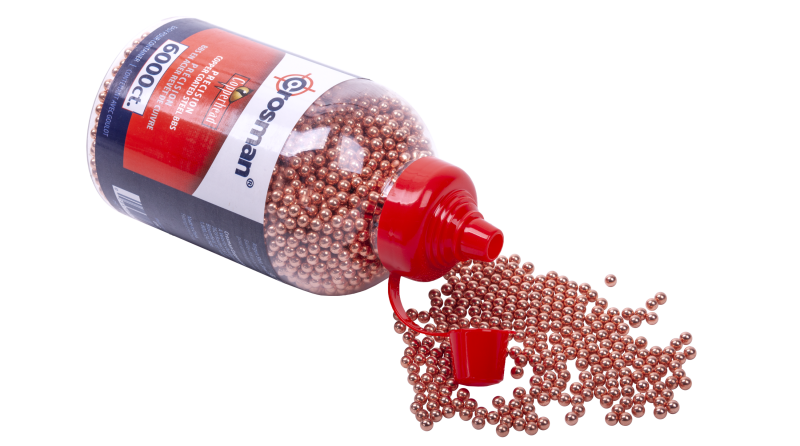 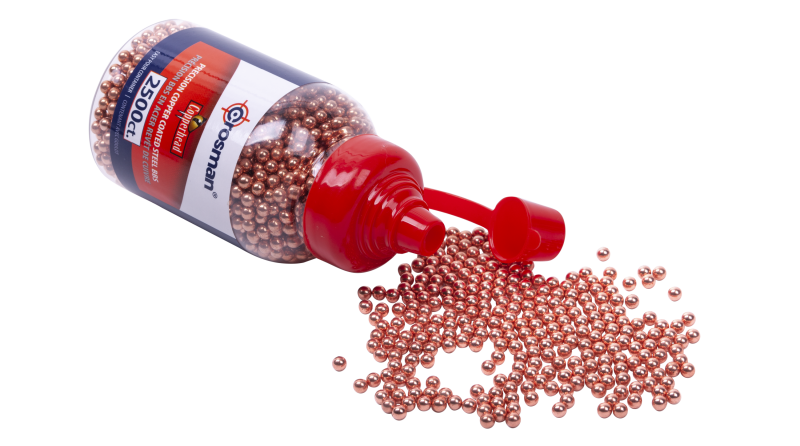 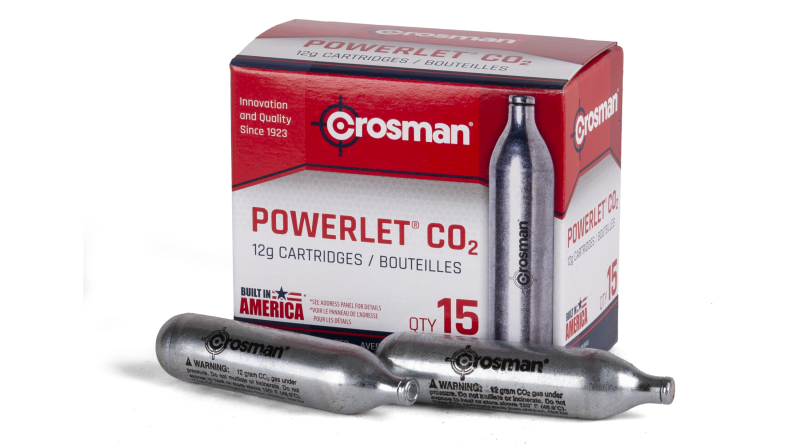 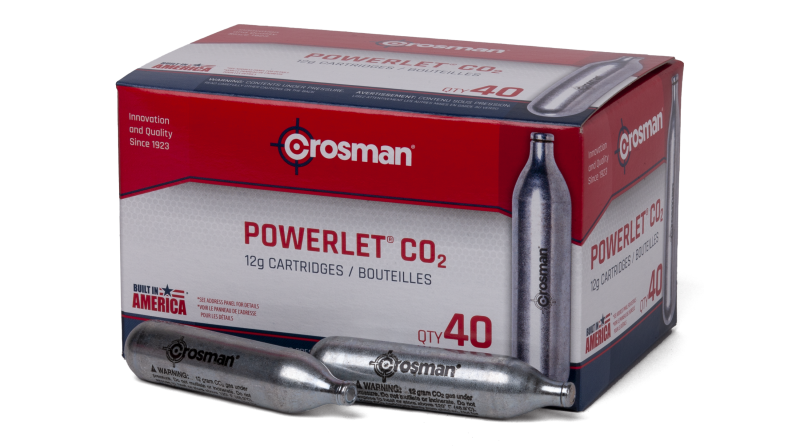 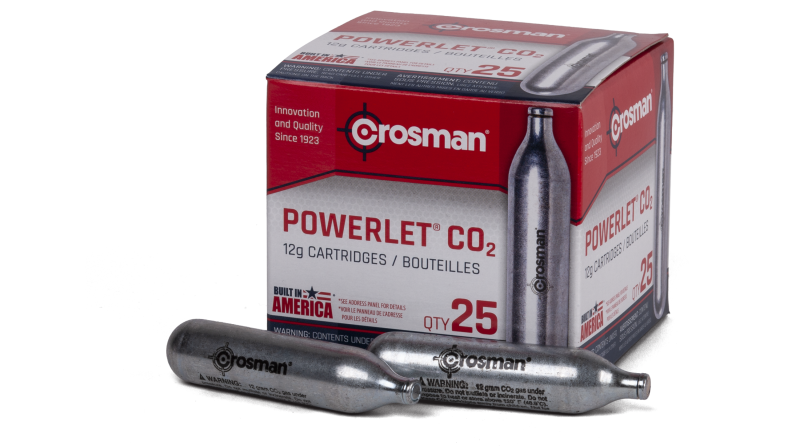 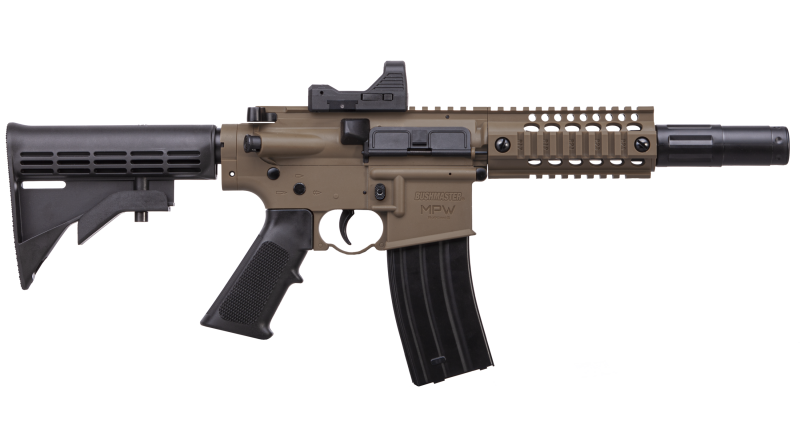